From its inception in the late 1950s, by Bob Shelton who salvaged set pieces leftover from the film Arizona (1940) that were abandoned in Tucson Mountain Park, up until 2020, Old Tucson has continually served as both a gold-standard backlot for big budget feature period Western films, and as a beloved western- and frontier-themed family theme park. At one point, it was believed that Old Tucson was the second most-visted attraction in Arizona after the Grand Canyon. Old Tucson has been the location for more than 400 films, television shows, music videos, and commercials. Some of the better-known productions filmed at Old Tucson include The High Chapparal, Gunfight at the O.K. Corrall, The Bells of St. Mary's, The Last Outpost (featuring Ronald Reagan), Little House on the Prairie, Three Amigos, and Tombstone.

Old Tucson features a wide variety of Wild West attractions, such as live action stunt shows, musicals and live entertainment, vintage rides for the kids, a narrow-gauge railroad, genuine southwestern barbecue and other food, and special events throughout the season. The park's signature event is Nightfall, a Halloween-themed event that has been thrilling Southern Arizonans for many years. Old Tucson also plays host to Yuletide, an immersive, family-friendly combination of the Old West feel and holiday magic! 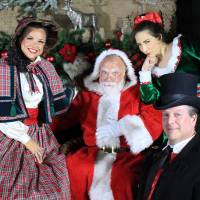 Yuletide is a new, immersive, family-friendly experience that combines the Old West feel that you've come to know and love from Old Tucson, with the magic of some of the best Christmas…

There is a problem with the data. Please try again later.
Total