Learn to fly at the Marana Regional Airport

There are more than 250 aircraft at the Marana Regional Airport. Some of the vehicles are military, some are private and some are educational. 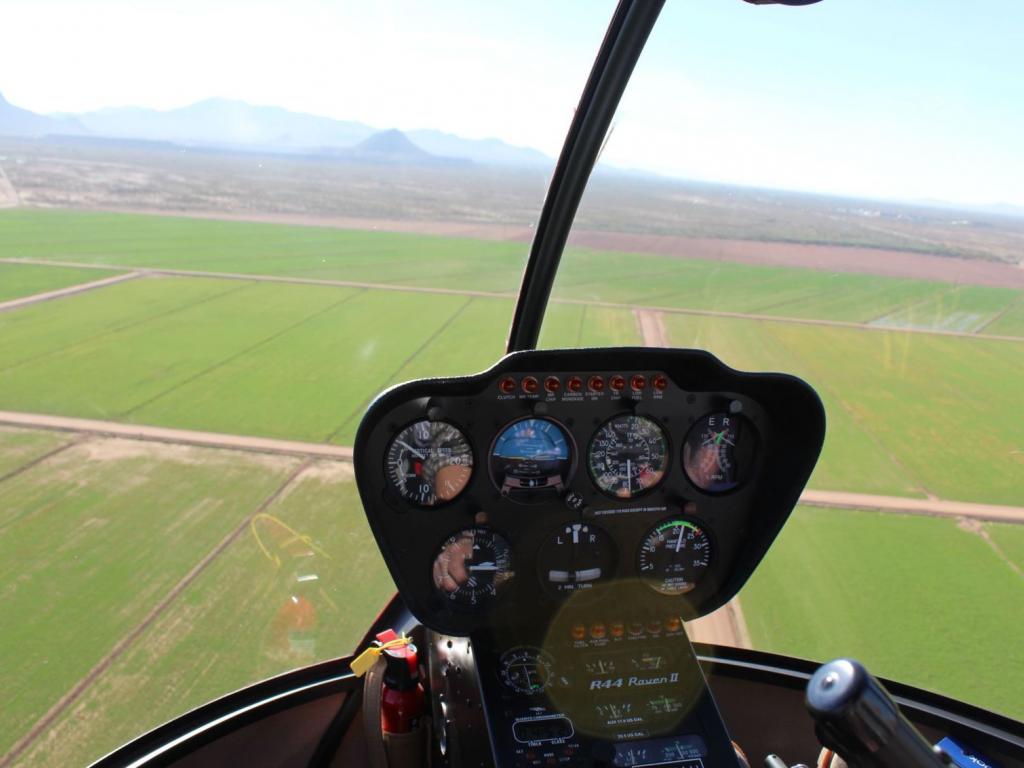 “You’d be surprised at the range of people who want to learn to fly,” Tyler said. “It takes a certain amount of confidence, but with enough practice, there’s no one who can’t learn.”

Tyler views learning to fly helicopters professionally as a kind of trade school for himself, an alternative to a traditional university. To him, it’s a cheaper and faster process. The FAA requires 40 hours in the air for a pilot certificate, and 150 hours to be a commercial pilot. Tyler completed this in about two years.

“I feel like some people view flying as a kind of ‘rich person’ thing,” Tyler said. “But if you look at the numbers, it really isn’t.”

With Tyler flying the helicopter and Tasha running the business, the Sturges’ offer training and sightseeing all over the Tucson landscape: Saguaro National Park, Picacho Peak, Mount Lemmon and more.

Once it takes off, a helicopter can be more relaxing than many might think. The earth rolls beneath you, fields and plateaus sweep up and down, and the sky becomes a tangible location. That is, unless you’ve selected one of Volare’s “thrill-seeker” packages, where helicopter’s doors are open and the hectic winds whip your hair about.

“They’re just awesome,” Tyler said. “You can go on an adventure in the mountains and see places you’d never otherwise know about.”

“It’s definitely something I’d never think to do,” Tasha said. “But now that I’m doing it, I love it.”

The Marana Regional Airport is also the stage of many military drills, including paratroopers, which can look very interesting when you’re also in the air.

“I don’t think I’d be interested in that,” Tyler said. “I’m really not much of a thrill seeker -- a helicopter is enough.”

Not only does the Marana Regional Airport offer some of Southern Arizona’s only helicopter training, it also offers a traditional flight school run by Mike Matthews. And for those who feel airplanes and helicopters are just too traditional, the airport also offers the only light-sport aircraft training in the state, thanks to one Neil Bungard.

Aviation always interested Bungard. First, he was an engineering professor, then a missile designer for Raytheon. But the first time he saw a light-sport “trike” on the tarmac, he knew what he truly wanted to do. Over a decade later, Bungard still flies every day.

“I used to keep a log of my flights,” he said. “But realized that all I’d do is write in it, because I was flying so much.”

Light-sport aircraft, colloquially known as ‘trikes’ are defined in the US as motor-powered, two-seated aircrafts that just a bit heavier than ultralights.

“It’s as close to being a bird as you can get in aviation,” Bungard said. “When you first start flying trikes, you’re flying the machine, but after a while, you fly the air itself.”

From about 800 feet above the ground, you realize that you’re really just sitting on a hang-glider with a motor attached: strata of wind push you back and forth as your aircraft climbs higher into the sky, the updrafts rushing from the hillsides accelerate you, canals and washes make patchwork of the fields below.

“It’s a combination of flying and snowboarding,” Bungard said. “The minute you think you’ve got it nailed, the air will throw something new at you. There’s always more to learn, and there’s an infinite number of variables.”

Bungard estimates he is one of only about 12 flight trainers of this category in the country, and for good reason.

“It takes confidence to be a flight instructor on these,” he said. “Every landing in the first eight hours of learning is a new way the student might kill you.”

Although the trikes are only a few hundred pounds, they are capable of flying for six hours. Bungard has flown all over Arizona, even up through the ridges of Monument Valley in them.

“Even after all these years it never ceases to amaze me.”

The Marana regional airport is located at 11700 W. Avra Valley Road. More information can be found online at maranaaz.gov/airport/ or over the phone at 382-8052.