Food & Wine Magazine officially deemed Eegee's as the best fast food in Arizona. There are two Eegee’s in Marana: One is on Courtney Page Way off Cortaro Road and the other Eegee’s is on Thorneydale at Ina near Bookman’s. 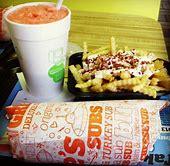 TUCSON, Ariz. — A Tucson staple has been officially deemed the best fast food in Arizona.

In a list published by Food & Wine Magazine, Eegee's took the top spot in the Grand Canyon State.

The article gives a special shout out to the famous grinder sandwich, as well as the frosty cold lemon eegee.

"Tucson likes to talk about its pioneering status as the first North American city to be designated a City of Gastronomy by UNESCO, in celebration of its rich, multicultural culinary heritage, starting with some of the world’s best flour tortillas, and while it is highly unlikely the decision-making process at the United Nations-appointed agency was swayed by a sip of a frosty-cold lemon eegee (frozen lemonade, essentially), or a bite of a delicious grinder stuffed with salami and provolone and pepperoncini, Tucsonans who have been wonderfully faithful to this relatively obscure regional treasure, hard at it since the 1970s," the article says.

The restaurant chain currently has over 20 locations in Arizona.

KGUN9 got a behind-the-scenes look at Eegee's last year as a part of our Absolutely Arizona series.