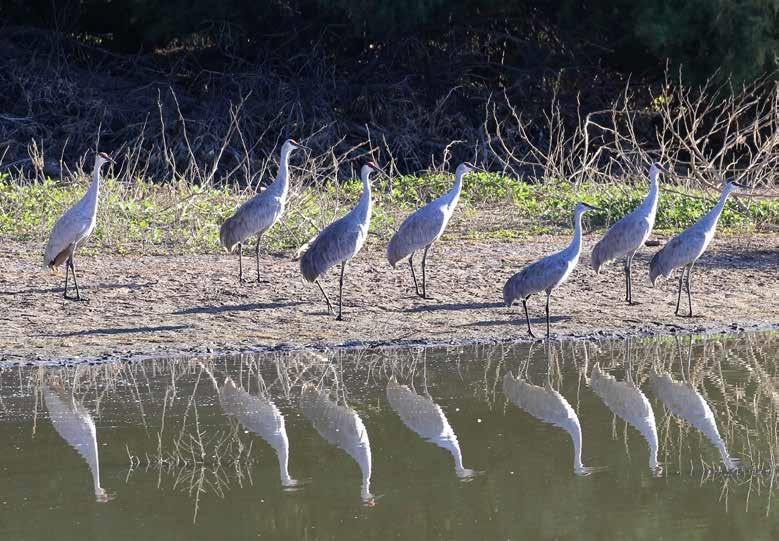 Riparian enhancement of the El Rio Open Space Preserve (aka Coachline Gravel Pit) is getting a foot up this fall. This site has over 220 bird species recorded on the eBird website (ebird.org/ebird/ hotspot/L350281), making it an important birding site in the Tucson area. Bird sightings have included a flock of Canada Geese, a Greater White-fronted Goose, American Avocet, Least Tern, Peregrine Falcon, Zone-tailed Hawk, Barn Owl, gulls, Blue Grosbeak, a White Pelican that stayed for months, many waterfowl and shorebirds in the winter and many warblers in the summer.

El Rio was described in the October/November 2015 edition of the Vermilion Flycatcher. Since that time, Marana has budgeted $400,000 toward riparian restoration at El Rio, and was awarded a $35,000 grant from the Water Infrastructure Finance Authority for planning and design of riparian restoration. Marana has contracted for cultural surveys and a preliminary jurisdictional delineation, to comply with the Historic Preservation Act and Clean Water Act, before work begins.

Marana recently submitted a proposal to PCRFCD to construct a berm that can withstand 25-year flood events and would enable riparian work to be completed without frequent flooding and sedimentation from the Santa Cruz River. A berm would also reduce mosquito problems, trash accumulation, and invasive weed seeds that flow in. PCRFCD will announce if the project will be approved, and the timeline for work, in the Spring of 2017. The El Rio Open Space Preserve is an important piece of the Tucson Mountains-Tortolita Mountains Regional Wildlife Linkage, described in the Missing Linkages report (Paul Beier et al. NAU 2006) and in the Pima County Wildlife Connectivity Assessment (Arizona Game & Fish Department 2012). Pima County, Tucson Audubon, the Coalition for Sonoran Desert Protection and Marana have worked with developers in the area to maintain this critical regional wildlife linkage.

El Rio will be another link in the Santa Cruz River riparian preserves, along with Pima County’s Cortaro Mesquite Bosque, Marana’s native plantings mitigation site near Twin Peaks Bridge, Tucson’s Sweetwater Wetlands and the County’s Kino Environmental Restoration Project. These protected riparian areas will become increasingly important as drought continues and if water is diverted from the Santa Cruz River for off-channel recharge projects or other purposes. Migratory birds and other pollinators need both safe havens and surface water, which are becoming scarce due to development and climate change.

Marana contracted with a Landscape Architecture graduate student from the University of Arizona to create a concept plan for the site, which was refined with feedback from the Task Force. Marana plans to maintain the natural character of El Rio: removing some of the invasive species, planting more native vegetation, creating storm-water harvesting features, creating aerated ponds lined with a natural material, adding bird and bat boxes, installing interpretive signs and a few benches, and creating an Americans with Disabilities Act-accessible path along the south side and a natural-surface path through the site. Marana has identified three alternative water sources for supplemental irrigation and to keep the ponds wet. Work will be phased as additional funding is available. The Loop Multi-use Trail is being extended within the next few months, and will run adjacent to El Rio.

Tucson Audubon Society has long been involved at the El Rio site: planting native plant species in 2012 before the area flooded in September 2014, spreading the word about the subsequent birding opportunities and, more recently, by providing input at Task Force meetings.

Directions: Take the Twin Peaks Road exit west of I-10, to the west bank of the Santa Cruz River, and go north on Coachline Boulevard. Follow Coachline until you are past the houses and see a pump station with a blue roof on the north side of the road. Turn right at the new Pima County parking lot driveway just after the pump station and park by the berm.