This Event has expired.

Come celebrate the 91st annual Tombstone Helldorado Days! There will be special street performances, parade, a kids play zone (free of charge), food, fun and lots of entertainment! We hope to see you here!

Helldorado is held every third weekend in October in Tombstone, Arizona and consists of gunfight re-enactment shows, street entertainment, fashion shows and a family oriented carnival.

In July 1881, a disgruntled miner writes the Tombstone Nugget newspaper stating that instead of finding their "Eldorado" of riches, many men ended up washing dishes or other menial jobs, finding instead, their "Helldorado". The term stuck. Helldorado is Tombstone's oldest festival celebrating its rip-roaring days of the 1880's. Helldorado, started in 1929, is sponsored by Helldorado, Inc. whose membership is composed of residents in Cochise County.

A very warm and sincere “Welcome” to all of you from the Helldorado board of Directors.  My goodness!  It has been a year already since we last celebrated the anniversary of Helldorado.  Eighty-nine years is a long time.  So much has changed in the world, and yet the citizens of Tombstone throw open their town to welcome people who love the history and magic of Tombstone.  We hope this is your anniversary for many Helldorado visits.  If it is your first visit, I’m pretty sure it won’t be your last.  Once you become part of Helldorado and part of Tombstone, Tombstone and Helldorado will become part of you.

Upcoming Dates For This Event: 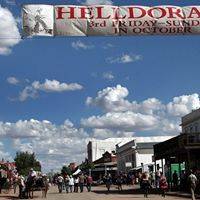